St. Alphonsus Church is a deeply rooted community dating back to the 1840’s when emigrants from Munster, Germany settled in the area and named it New Munster. Today, St. Alphonsus Church is a vibrant faith community that is known for its family appeal. All are welcome here, which is evident in the growth the Church has experienced over the last several years. Today, over 500 families are registered in the Parish and the number continues to grow as the Wheatland area experiences continued growth. 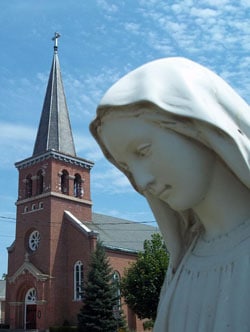 In 1926 priests from Holy Name of Jesus parish in Wilmot began to visit Catholic families around Lakes Elizabeth and Mary. In 1932 a Mission Church of Holy Name was formally established under the patronage of St. John the Evangelist.  Five years later, the Village of Twin Lakes was incorporated in 1937.

In 1942 a church building was constructed on what is now the site of the Haase-Lockwood & Associates Funeral Homes and Crematory in Twin Lakes. The church building was a simple, unfinished cement block structure with only the essentials for conducting Mass.  The majority of the initial building cost was funded by Holy Name. When the mission became a parish in June 1950, the building was improved to include heating, a finished hall, and other improvements.

On May 3, 1970 ground was broken for a new church at the current site that was similar in design to a Catholic Church that was radically changed by the Second Vatican Council. The wheelchair accessible building includes a large yet intimate worship space with a gathering area that flows into parish offices and catechetical space.  These design concepts are still used in new churches today, some 42 years later.

In June 2005 St. Alphonsus in New Munster and St. John the Evangelist began sharing a Pastor under the direction of the Archdiocese.  The parish rectory was later converted to provide area residents with social service support such as the Twin Lakes Area Food Pantry, Daybreak Adult Day Program and an office for our local St. Vincent de Paul Chapter, although one suite in the rectory was maintained for occasional overnight use by visiting priests.

And then in June of 2010, both parishes were assigned a Parish Director instead of a Pastor due to the increasing priest shortage facing the Archdiocese of Milwaukee.  With this change in church leadership models, parishioners became accustomed to having masses celebrated by a variety of retired priests who continue to share their gifts with our faith community during weekend and limited weekday masses.  Parishioners were also introduced to weekday Communion Services which are led by a trained lay minister instead of a priest.

Over the past number of years, parish collaboration has become a key element in maintaining a vibrant and spiritual faith community.  Through collaboration, the mass schedule was modified and a number of key staff positions are now shared between St. John the Evangelist and St. Alphonsus parishes which creatively utilize our resources while enabling our parishes to function more efficiently.  As an example, the Faith Formation programs offered by both parishes were recently combined and restructured to focus on lifelong faith formation.  Due to changing demographics within our surrounding communities, a regional Hispanic Ministry Program was developed and through this regional ministry program, St. John the Evangelist now offers one mass in Spanish per weekend.

At this time, there are about 600 faith-filled families within St. John the Evangelist Parish. With the Holy Spirit to guide us, we will continue to work together with our neighboring parishes to use the resources of all to welcome people to Christ – who truly is the Light that guides us through darkness. 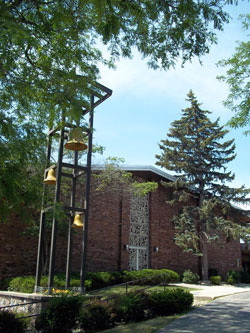 Current and past Bulletins are available at our publisher’s website.
Click this link below and then scroll down to view them.

Rite of Christian Initiation of Adults
Who is RCIA for?

Click here for more information about baptism and the steps towards becoming Catholic – for adults and children.